Over the past week, Xena (the official Downward Dog Photography spokesdog) has managed to achieve worldwide fame.  I knew it would happen one of these days...it was really just a question of when. :)

I'm speaking about her accomplishments with National Geographic.  She won 1 of 5 spots in a 'dogs' assignment where there were over 2,500 other entries.  She was also featured as one of the photo editor's picks for the 'daily dozen' highlighted pictures on Nat Geo for Tuesday, October 8th.

Here's the Nat Geo blog where her and her 'devoted story' is highlighted:

And just to prove her doggie devotion, here is a photo from last week: 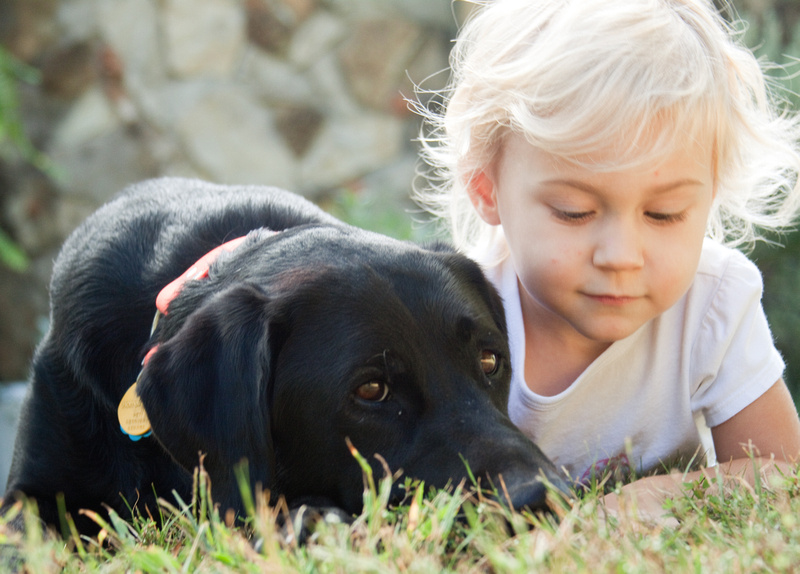 The picture I had entered in the assignment was from a couple years ago, so I thought I would revisit that moment in time with this blog.

The camera I was using is like a tank, and many of you 40+ers may have had one!  This particular Canon AE-1 was my dad's, and I was still using his original (super sweet and stylish) 1970s camera bag.  (note how it is still fully in tact with zippers working...try finding something that well made now!). 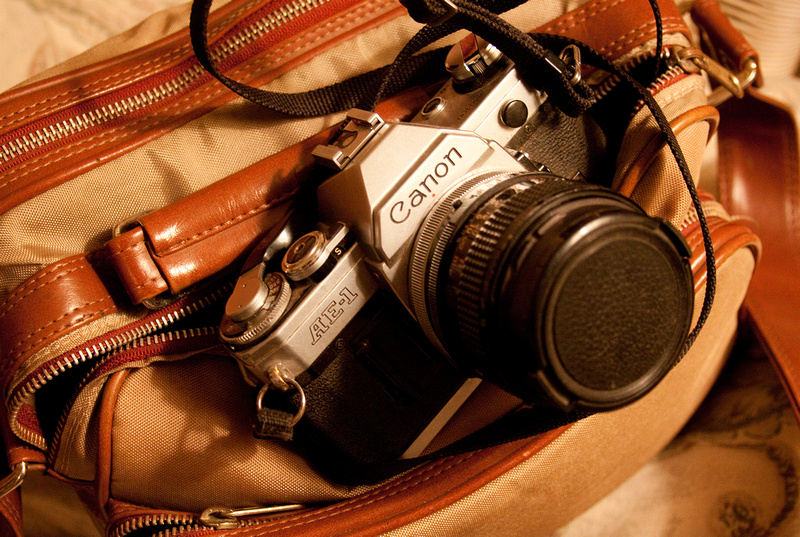 Tim and I had decided to take a February trip to the Mt. Magazine area in Arkansas (we mostly hiked in the Ozark-St. Francis National Forest). 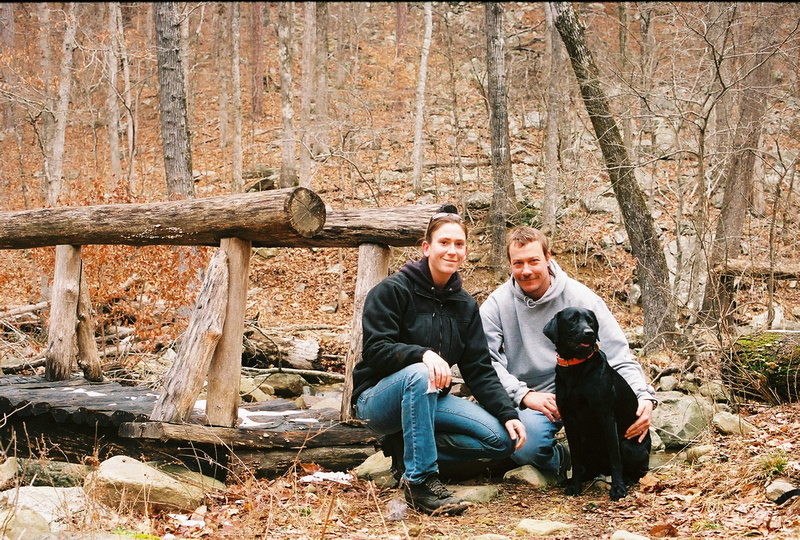 (Tim was going through a creepy man mustache phase...please don't hold that against him.) 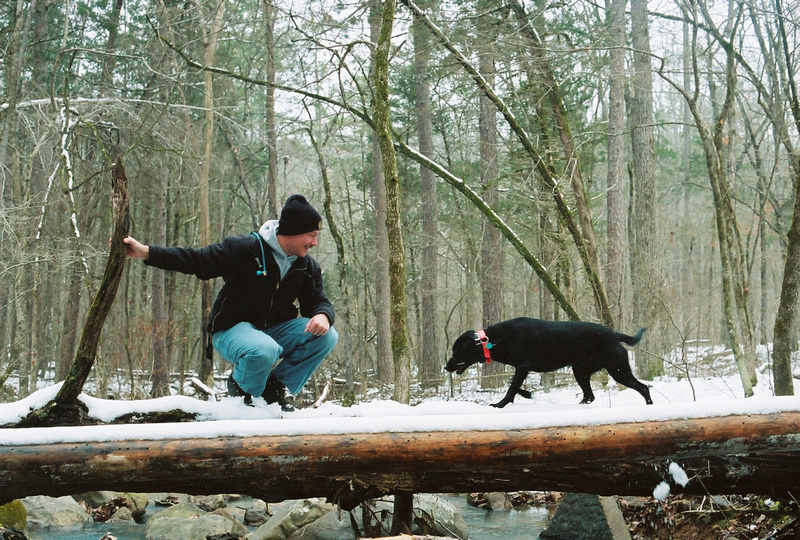 So there we were, hiking along a forest trail...crossing creeks, having dorky tree id arguments, watching Xena run around like a ninny...

When all of a sudden, it started to snow.

(I was into setting the timer a lot, so here we are again after the snow started). 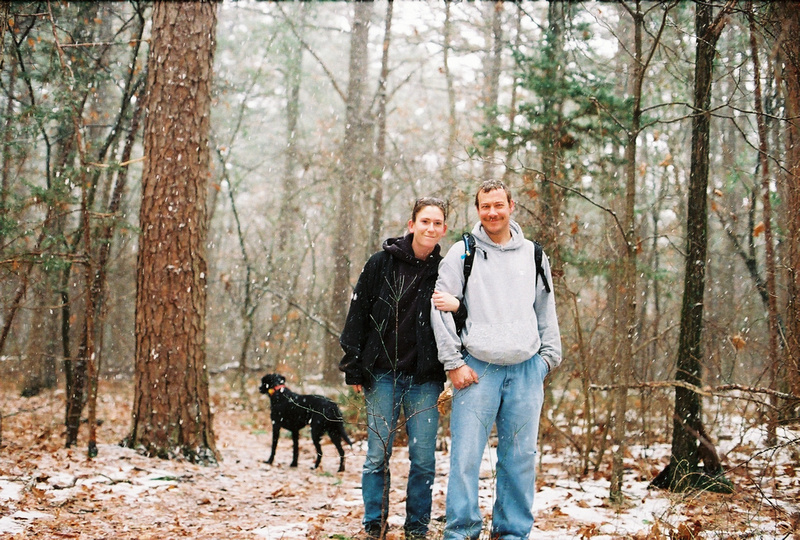 Then, we happened upon a pond in the forest, along the trail. 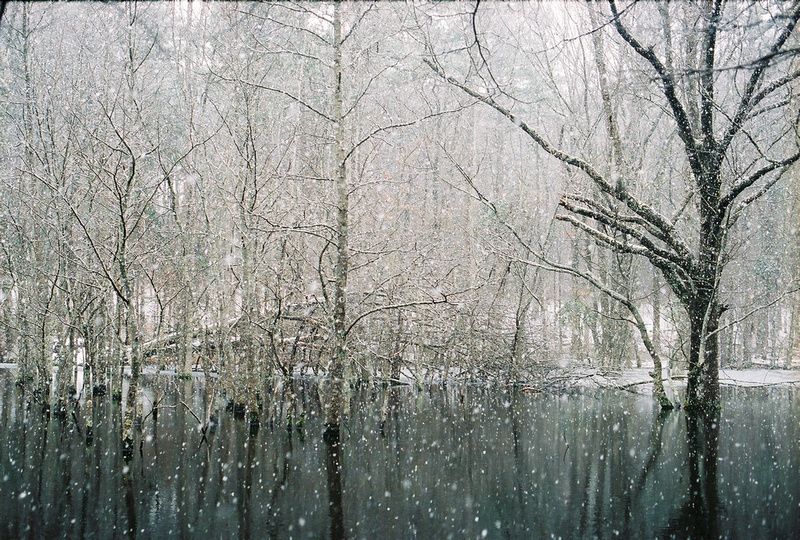 I, of course, got all sorts of excited with my camera and started snapping pictures. 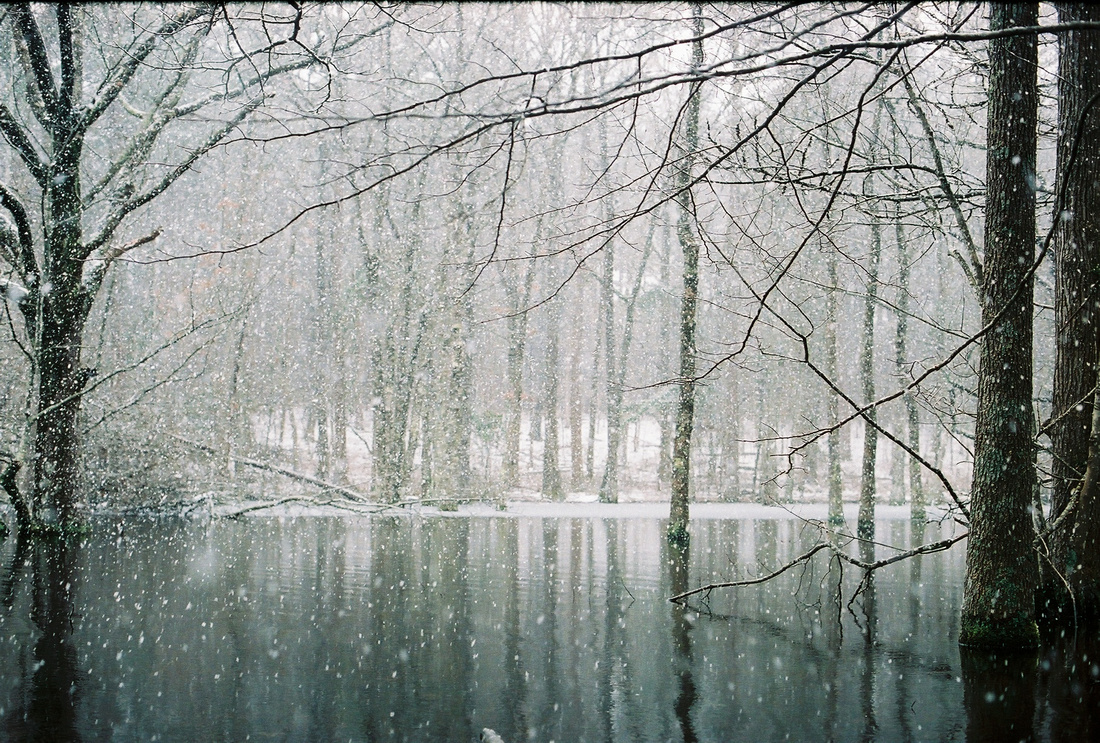 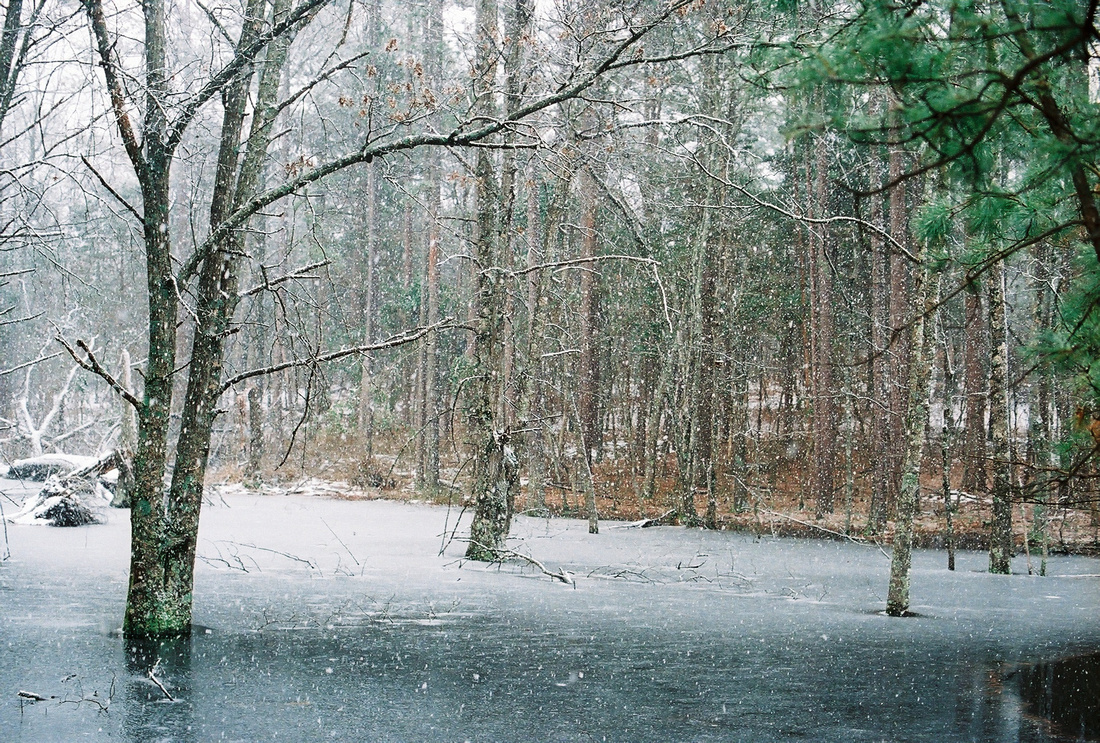 What were Tim and Xena doing?  See if you can spot them on the other side. 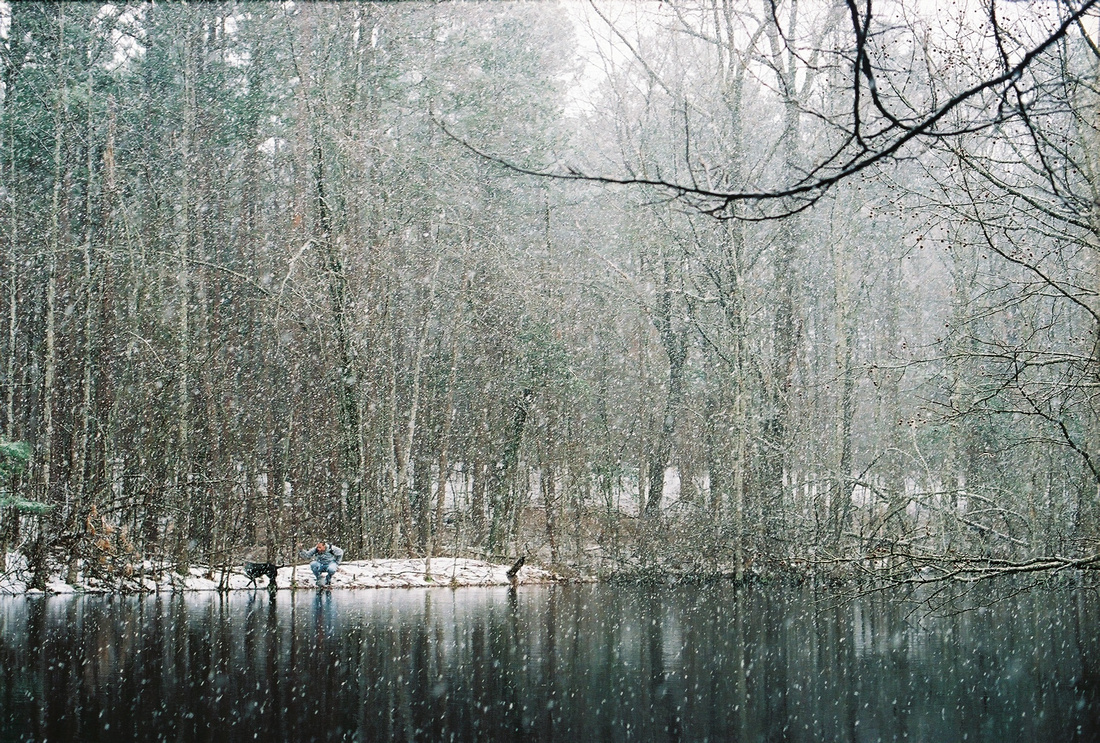 I remember having to change the film in my camera and shielding the camera from the snow so that those huge flakes didn't get inside as I pulled out my first roll and put in another...pressing the shutter a few times to advance the film.

By that time, Xena had decided to come around to my side of the pond and step into the water. 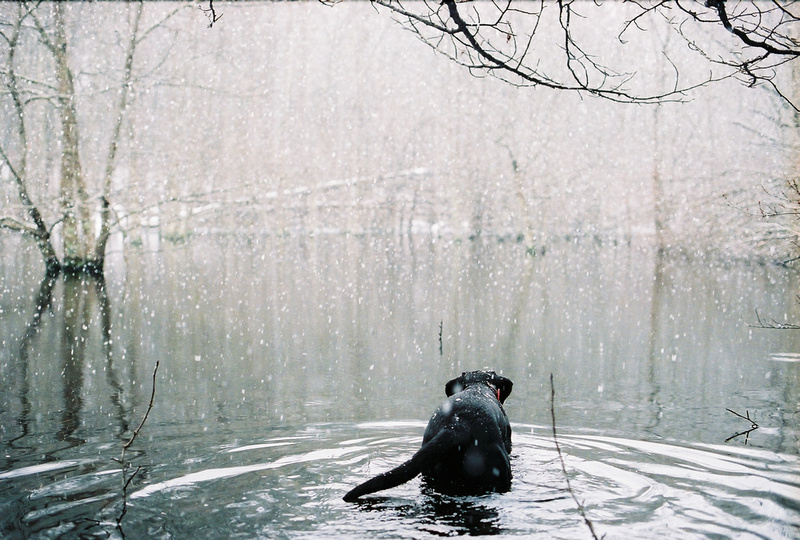 She crept out ever-so-slowly, mimicking the quiet snowfall around us (this is her now famous shot). 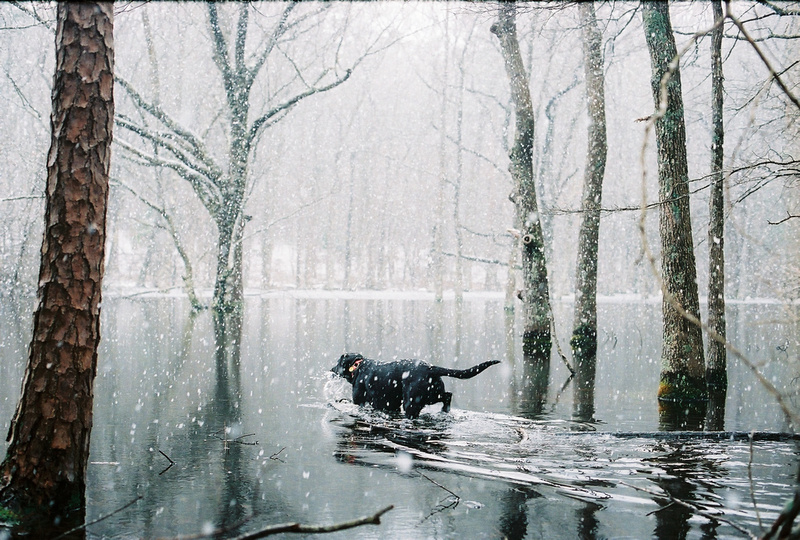 And when she got out there far enough...she turned around and decided to run back! 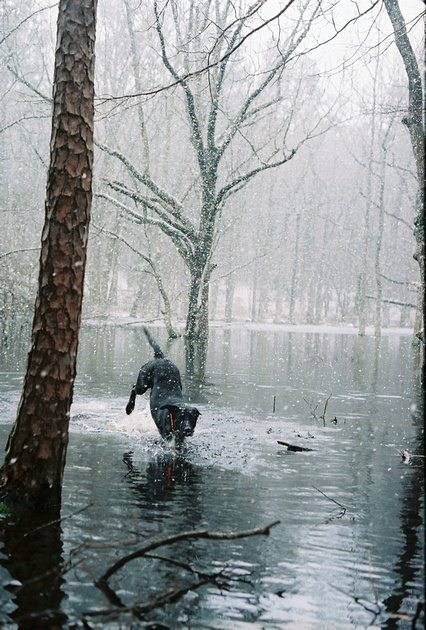 And then shake off. 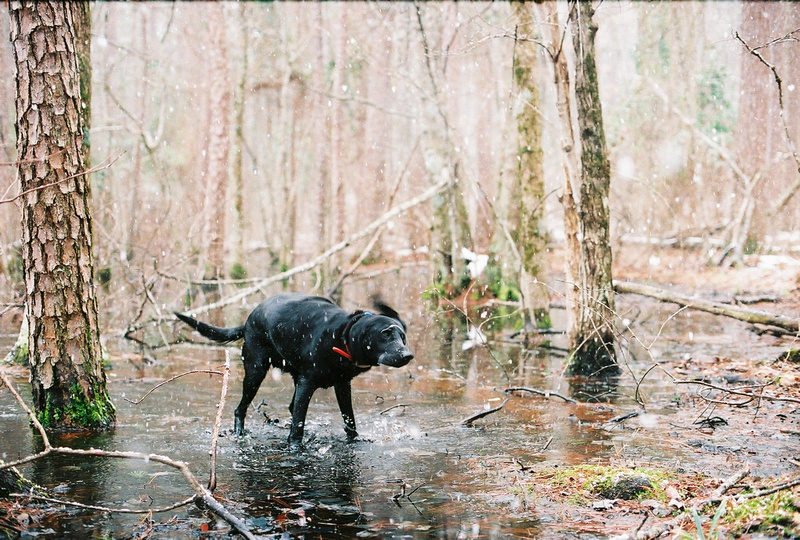 Leaving the pond to it's stillness once again. 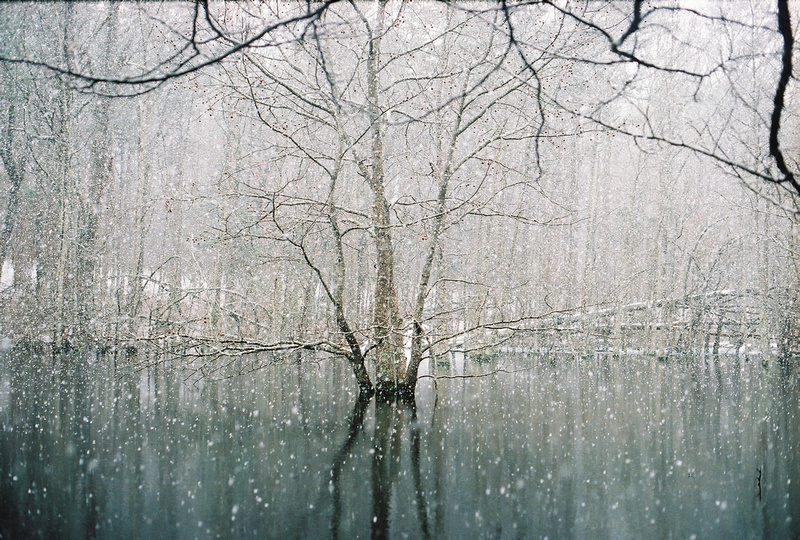 I remember really hoping that these pictures would turn out, because it was such a magical little moment in time.  And, I guess it was meant to be, because most of them did.  Those big fat snowflakes that snuck through my shield during film changing time didn't hurt a thing.

We had an amazing trip, and the snowy pond was definitely one of the highlights.

So, this week, we celebrated by walking down the road to our neighbor's pond for some doggie fetch (we do this every week, I'll just call it our celebratory walk for dramatic effect).  Xena swims out and brings the stick back, and Bullet attacks her when she is close to shore.  Never a dull moment!

Congrats Xena!  Now, back to work (do you ever speak to yourself through your dog?)